“Looking at our golden wheat, the yield is bound to exceed 1,200 jin (1 jin equals to half a kilogram) per mu (1 mu equals to 0.067 hectares), securing a bumper harvest for this year!” Mr. Cheng’s wheats are ripe and the large combine-harvester is harvesting now. Standing by the fields, he shares the joy of harvest with Yin Heyan, head of the No.1 Sub-farm of Huangfanqu Farm.

According to Gou Guohua, deputy chief agronomist of Huangfanqu Farm, as the largest Chinese state-owned modern farm in Henan, its 100 thousand mu of wheat fields are expected to yield 1,100 jin of wheat this year based on the three indicators of the wheat production (spike number per mu: 430 thousand; grains number per spike: 34; weight per thousand grains: 45.8g). 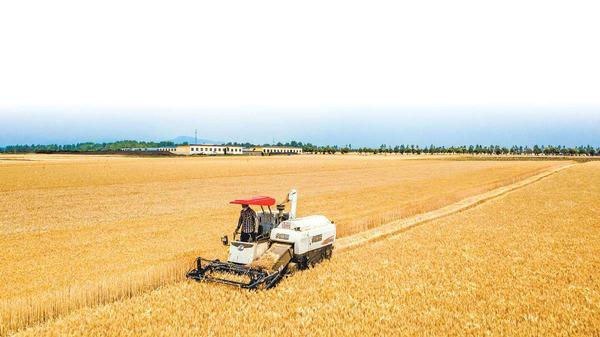 As the wheat is gradually ripe, Huangfanqu Farm will welcome its another new harvest year. Meanwhile, news from Henan Provincial Department of Agriculture and Rural Affairs on May 31 showed that by 5 pm that day, 4,406 mu of wheat has been harvested across the province, accounting for 51.5 percent of the total.

According to Henan Provincial Center for Agricultural Machinery, more than 180 thousand large combine-harvesters have been put into operation in this year’s wheat harvest. At present, the wheat harvest across the province is accelerating and progressing smoothly. 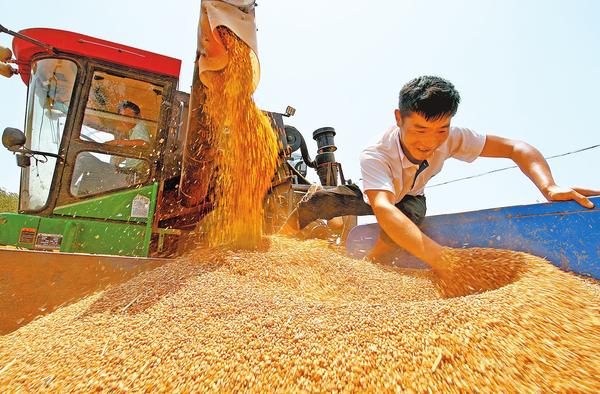 High yield and increased profit can’t be possible without the promotion and application of new science and technology. As a professor of Henan Agricultural University and an adviser (in wheat sector) of the Ministry of Agriculture and Rural Affairs, the 67-year-old Guo Tiancai has been working on wheat planting for over 40 years. On the evening of May 25, he went to the wheat fields of Zhangyao village of Erlang town, Xiping county, which was his fourth visit in the past two months.

“Mr. Guo, glad to see you again! How about my wheat?” Zhang Sixin, a big wheat planter, walked directly to the wheat fields together with Mr. Guo. Before the May Day holiday, Guo Tiancai also went to the South Henan area to help the locals to prevent and control diseases, such as stripe rust and gibberellic disease, that may affect grain output. During his stay in Linying, more than 10 big grain planters surrounded him and scrambled to invite him to see their fields.

Mr. Guo usually spends more than 180 days in the wheat fields for research and study while the annual growth period of wheat is over 240 days. According to him, professional planting skills are badly needed by the farmers to increase their yields with lower costs. Over the past 40 years, Mr. Guo has pioneered new methods to cultivate crops with high yields and provided technical advice to the government at all levels. During the COVID-19 pandemic, he also managed to share his experience in soil moisture and wheat crop management with his farmer friends via video.

It is reported that, with 1/16 of China’s arable land, Henan produces 1/10 of the country’s grain and 1/4 of the wheat. As China’s largest food processor and meat producer, the province sells its agricultural products to 137 countries and regions. It is turning itself from “China’s Granary” into “Chinese Kitchen”, bringing more choices to the world table.